Friday, February 27, 2004
Our new puppy! Well, we got a puppy yesterday. His name was Vixen since he was born right around Christmas (his brothers and sisters were named for the other reindeer. We are trying to come up with a permanent name, but haven't decided on one yet. Our new chair came today for the living room. Looks great with our couches. Last night with the puppy was rough. Hopefully it will get easier. He has a vet appointment today at 3:00. We are going to have to start some obedience classes soon. 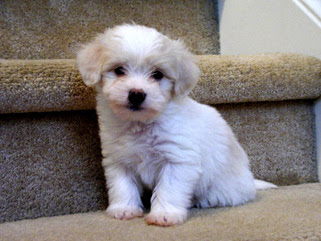 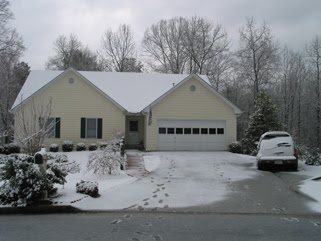 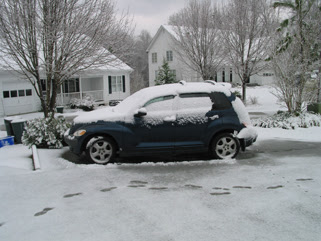 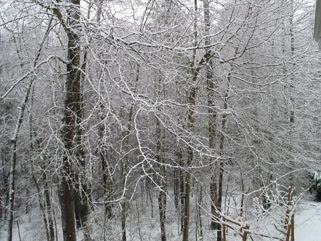 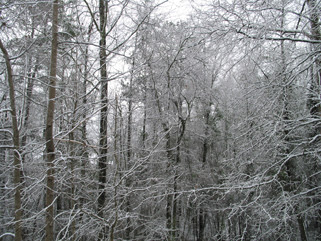 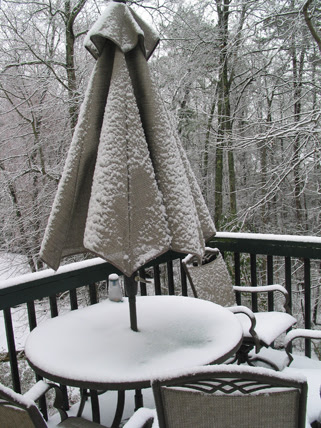 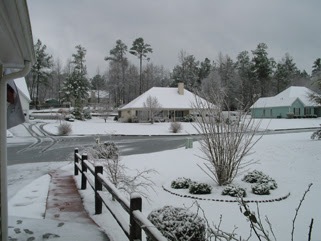 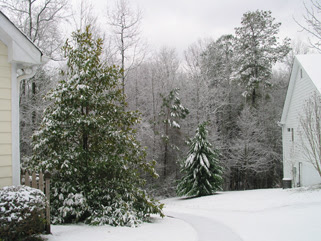 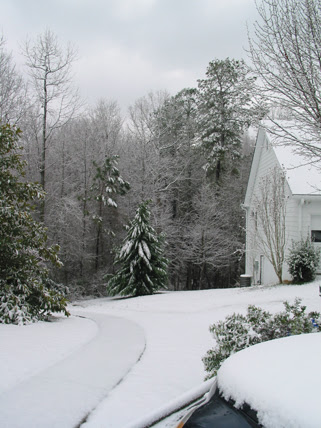 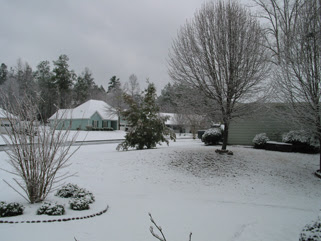 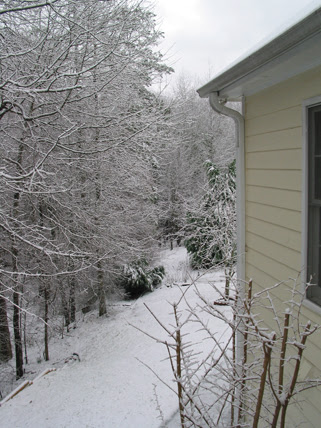 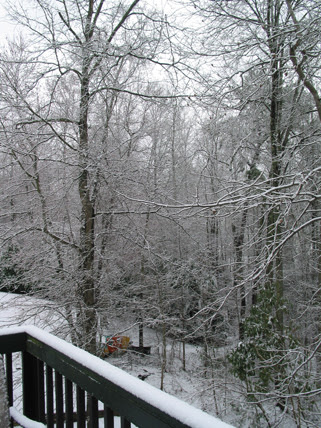 Here are the pictures my Dad took of the snow at their house... 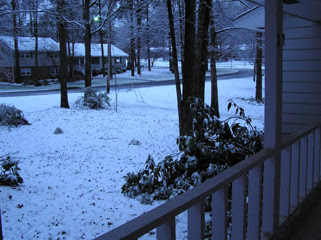 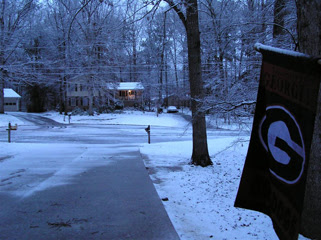 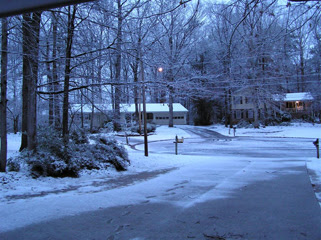 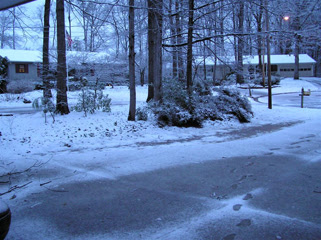 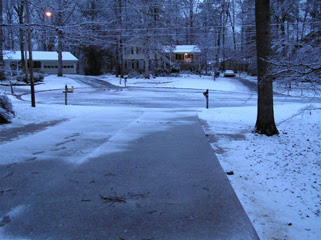 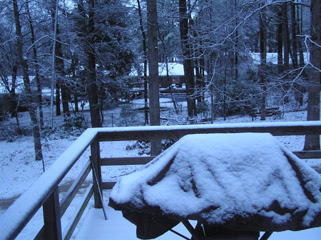 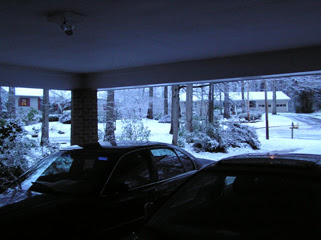 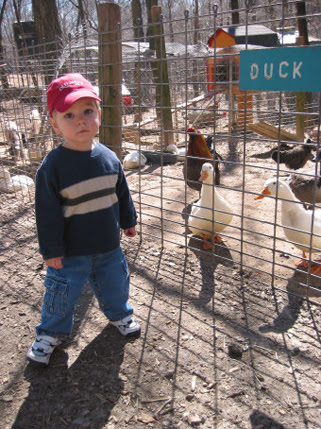 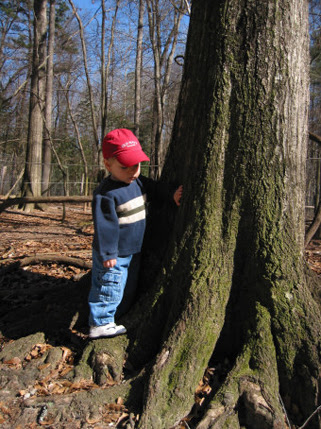 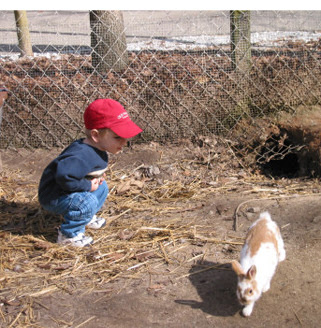 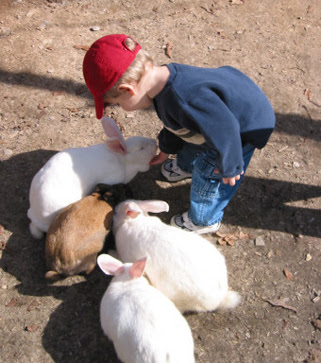 Monday, February 23, 2004
I love HBO Well, last night was the last Sex and the City episode and I don't think it could've ended better. Now I'm just looking forward to the new Sopranos in two weeks and the new Six Feet Under in June. Fun stuff!

Sunday, February 22, 2004
Birthdays and weddings and showers and Athens Friday was my mom's birthday. She just turned 55. We had a family dinner at the Hibachi grill restaurant near their house. Then we went over to Rebecca and Jake's house and played with Ethan for a while. He and Austin were so cute together. Ethan grabbed Austin's hand (he calls him "Auttie") and pulled him back to his room saying "Puppy show" (which is really puppet show). And Austin actually tried to do a puppet show for him. When I walked back there Austin was on one side of a sheet holding a dinosaur and talking in a funny voice. Ethan was laughing and throwing toys over and under the sheet at him. He's such a funny kid. And Jake was showing us a really cute video of him and Ethan (he had set up a camera and filmed them playing together). Ethan was laying on his back and Jake was tickling him. Every time Jake would tickle him Ethan would scream and laugh. Ethan was watching the video and he started to scream and laugh every time he saw himself scream and laugh on the video. It was so adorable.

We went to Ashley's bridal shower lunch yesterday and it was so much fun! Ashley's mom's friends were so funny and nice. And Ashley looks gorgeous! She's lost weight and her hair is long and she looks great. It was so good to see Ashley and I really like all of the other bridesmaids. I'm getting so excited about the wedding and the bachelorette party and the rehearsal dinner. I know it is going to be great.

After the shower my sister and I drove up to Athens. We ate an early dinner at the Grit (I miss that place so much!) and then we went to my friend Jennifer's (from work) wedding. It was beautiful. They got married in this church in a big warehouse with candles lit everywhere. It was very cool. They even had a girl sing a song that Zack (the groom) had written for Jennifer. It was very sweet. The reception was in the conservatory at the Botanical Gardens. It is a beautiful setting for an event.

Then we went and met my mom and her brother Doug at East-West for coffee and sorbet (they had eaten dinner there, but we were pretty full from the Grit and the reception food). And then we went across the street to Tastyworld to see my cousin Caroline in her band, Umpteen. And they were really great. She's the lead singer and she's got a really great stage presence. It was all so much fun. My feet are sore now from wearing my boots all day though!

Friday, February 20, 2004
Working for me Well. It was my first week of not having to work full time. My furniture isn't at the new office yet, so I've just been working at home. And considering that it was my first week of working for myself, I was incredibly busy (I think my boss is a little demanding ;) ). Anyway, things are going well and yesterday was so beautiful, sunny and warm - it was the kind of day that made me feel glad to be alive. And it certainly made me appreciate not being cooped up in a basement. Don't get me wrong, working with the Porters was a great learning experience and I am still getting freelance work from them; I just feel so lucky to have the opportunity to work for me.

Monday, February 16, 2004
My cute husband and my cute nephew Well, Valentine's day was wonderful and romantic. We ended up eating at the Old Spaghetti Factory and then going to see Romeo and Juliet at the Fox. I never thought that Shakespeare could be so good without words, but it is a beautiful story and I love ballet, so it was a wonderful production. The dancers who played Romeo and Juliet were actually married, so I thought that was really sweet. They spend Valentine's day dancing together. Anyway, Austin was such a gentleman. We had a great time.

On Sunday I went with my mom and sister and nephew to a Children's museum in Atlanta. I don't remember the name of it. But Ethan had a great time. He played in the sand and in the water and he painted and played with giant tinker toys.

Tuesday, February 10, 2004
I have the most wonderful husband in the world! (Even though he never leaves comments on my webpage) Austin is taking me to see a ballet! We are going to see Romeo and Juliet at the Fox Theatre for Valentine's day. We are going to go to a nice dinner beforehand at Dante's or some place. I can't wait. He's so sweet!

Monday, February 09, 2004
Bathtime! Becca and Jake sent me this picture of Ethan. 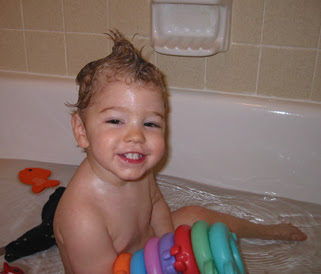 Shake it like a Polaroid picture Outkast sure did well at the Grammy awards ceremony last night. They deserved it. They are really talented. I think that Radiohead or White Stripes should've beaten Warren Zevon (I think him dying had something to do with it) for Best Rock Performance By A Duo Or Group With Vocal (and how long is that category name?). And I think that the only reason Luther Vandross and Richard Marx won for best song was because Luther Vandross had a stroke. But that aside, it was an okay awards ceremony. I'm glad they did a Beatles tribute.

Friday, February 06, 2004
Eat your heart out There are certain foods that you only eat one day or month or season out of the year. I always end up eating a lot of them since I know it will be another year before I can have them again. In February it is Sweet Tart hearts. I know that they are just normal Sweet Tarts shaped as hearts, but there's something about that heart shape that makes them so much better. Then, coming up, girl scout cookies will be for sale - yum. And around Easter the Cadbury eggs and mini eggs come out. The summer isn't so bad, because fresh fruit is actually okay to eat. But then October hits and candy corn and lots of candy in little individual bags. And Thanksgiving is just the gateway into the sugar overload that is the Christmas season - don't even get me started on peppermint ice cream and egg nog lattes and marshmellow santas. UGH!!! I have got to join a gym - SOON!!!!

Wednesday, February 04, 2004
Lite FM - Songs that make me want to vomit Well, after listening to the Lite FM radio station for about two weeks straight, we have decided to finally turn the radio at work off. Thank God!!! In honor of the silence, I have decided to post the ten most horrible songs that I've had to listen to over and over and over...

10. The Game of Love - Santana/Michelle Branch This song has actually bored its way into my psyche, and I actually don't hate it as much as I did the first time I heard it.

4. Dance with My Father - Luther Vandross

3. Unwell - Matchbox Twenty They sucked when they first came out and they suck even more now

1. Georgia - Michael Bolton He can sure butcher a song! The idea to have Michael Bolton sing Georgia is almost as good as the idea to make Looney Tunes Chia Pets. And he's from freakin' Connecticut!!!

Tuesday, February 03, 2004
Tuesday's gone! Well, not quite yet, but the Tuesday workday will be over soon. I feel like my outfit doesn't match today.

Monday, February 02, 2004
What's happened to Britney? I have never been fond of Britney Spears, but my God, look at her now! I don't think she could wear much less in her new video.

Anyway, I am sorry for the lack of pictures lately. Unfortunately my camera is having some problems. The lens is not closing correctly most of the time, so it has been a pain. I need to borrow Austin's camera to get some pictures. But anyway, it was a great weekend. We got to see very cute puppies and I had a wonderful lunch yesterday with Amanda and Corinne. It is always good to hang out with your girlfriends that you can totally be yourself around. I have known them since the seventh and eighth grade and I never tire of their company. It is so great to just hang out with them and laugh.

We also had a great visit with my grandfather yesterday. Austin's parents came with us and it was wonderful how it cheered my grandfather up to have so many visitors. It is good to see him happy.