Thursday, April 29, 2004
"You liked the ballet? Well, the symphony was off the hook." I was in Athens yesterday and I picked up some "Slang Flashcards" at a store downtown. They are so funny. I saw them first in an issue of Real Simple, but this was the first time I actually saw them in a store. They include definitions of the slang word which appears on the opposite side of the card, retro illustrations and they use the slang word in a sentence. Anyway, if you want to "Front a mad vocabulary" you can get the cards on the Knock Knock website. The site also includes card designs, wrapping paper, and other cool stuff.

And, if you need a wedding dress, or just a good laugh, take a look at this link.

Monday, April 26, 2004
Strawberry Fields and the attack of Ethan Well, Friday I thought my back was better so I went and picked strawberries. I also went to a produce stand in town and got some fresh vegetables. We then went to volunteer at the Loganville Scholarship run. I designed the T-shirts and I'll post a picture of one on here soon. Anyway, I did too much bending and Friday night I could hardly move. 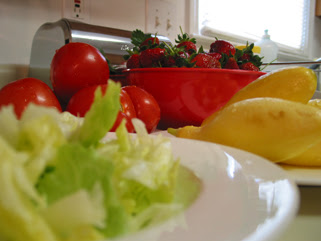 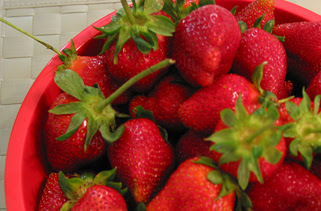 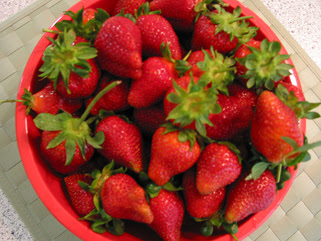 Becca sent me this picture of Ethan with their hose. He chased her into the house with it and ended up completely soaked. He would squirt her everytime she came outside to get him. I think she took this picture through the window. 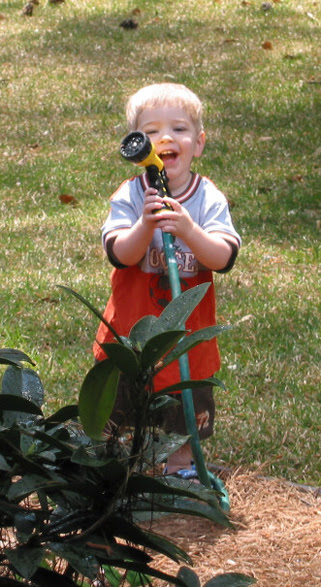 Friday, April 23, 2004
Wow! I have to thank my cousin for sending me this link and all I can really say about it is, WOW!

Wednesday, April 21, 2004
We're number one! But do we want to be? And by "we" I mean Atlanta. And by number one, I mean we have the overall highest pollen count of any other major city in America. At least that's what I heard on the radio. And, man I can feel it. I have a headache and can't stop sneezing and my eyes feel like they have sandpaper scratching against them. Anyway, if you want to see how ridiculous our pollen count is, go to this link. And as an example, an extremely high pollen count is over 120. On April 8th Atlanta hit a high at 3,191!!!! And today it is 670.

Sunday, April 18, 2004
The Atlanta Home Show Carson Kressley from Queer Eye for the Straight Guy was there. 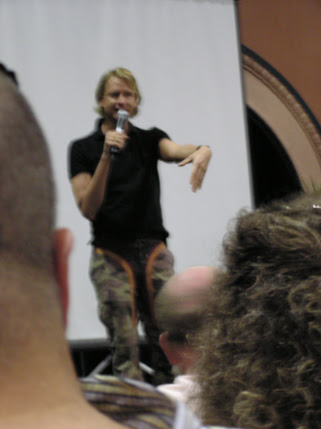 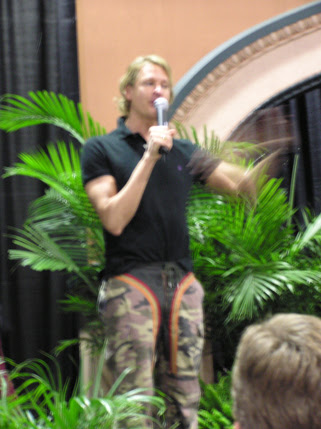 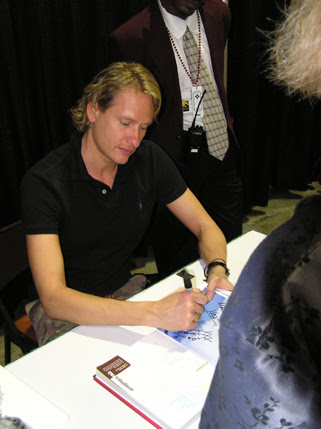 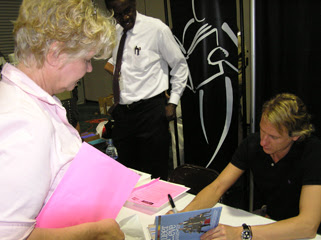 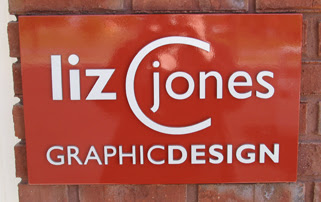 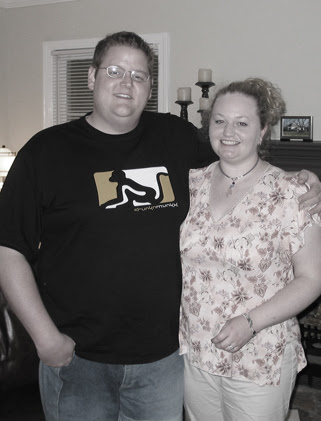 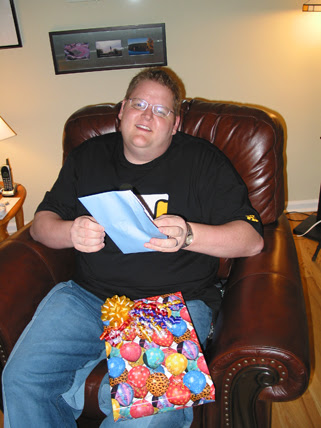 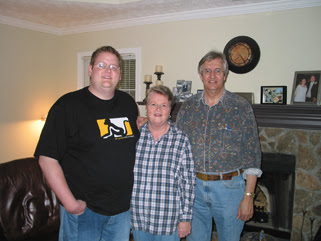 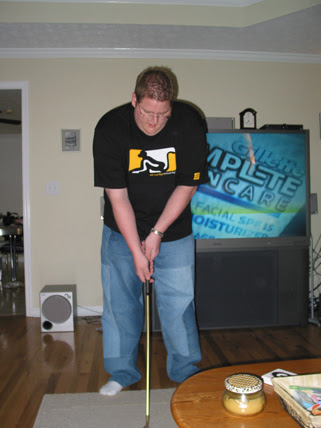 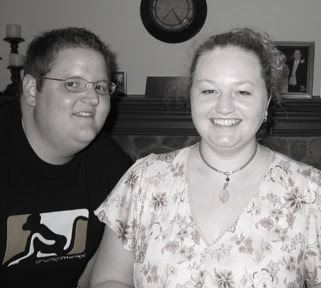 ATTENTION: UGA Graphic Design Alumni!!! There is actually going to be an alumni event this year on May 12 in Atlanta. I have details if you're interested. Just let me know...

Wednesday, April 14, 2004
Filth of the Earth Some cretin low-life scumbag stole my mom's laptop out of her office last night. This is the second time it's been stolen. It took forever for her to start enjoying computers and when she finally does, some piece of trash comes and takes it from her. They probably won't even catch whoever did it. It really makes me mad! 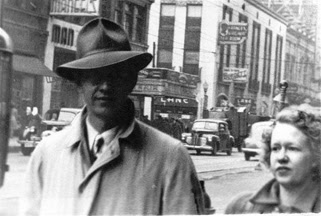 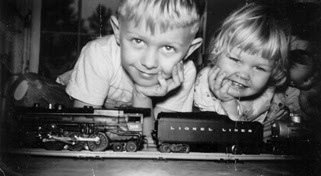 There are more photos at this link: 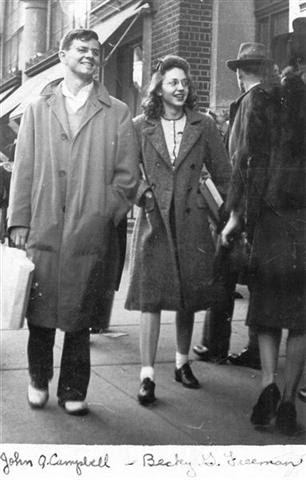 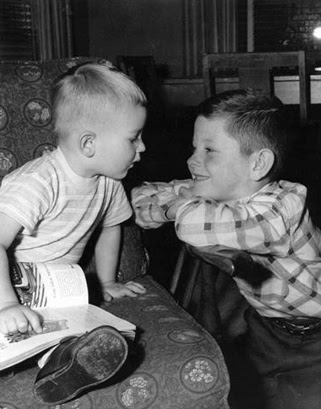 And for my dad's photos of Ethan's birthday photos, go to this link:

Sunday, April 11, 2004
Rednecks You know you live in a nice place when your neighbors are having a party in their back yard on a pontoon boat. Did I mention we don't live on a lake? We don't even live near a lake! We're talking dry land here folks. Dry land!

Birthday Extravaganza Well, it's birthday time! Amanda turned 26 on Thursday, Ethan turned 2 yesterday and Austin will be 28 on Monday. Anyway, Ethan's birthday party was today and then tonight we went out for a fabulous dinner for Austin's birthday. So here are the pictures of the birthday party... 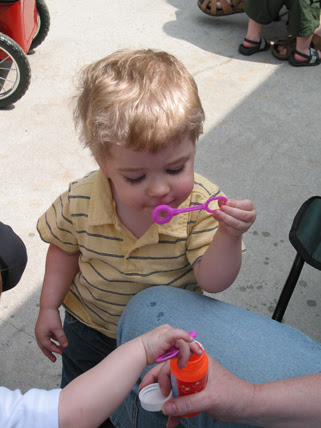 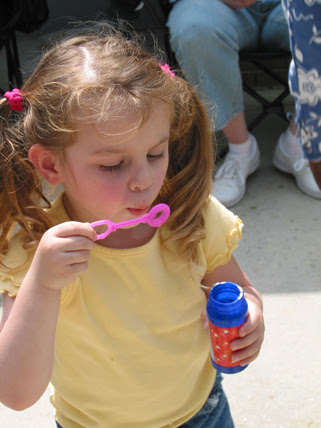 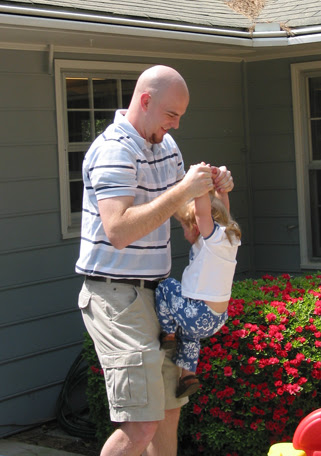 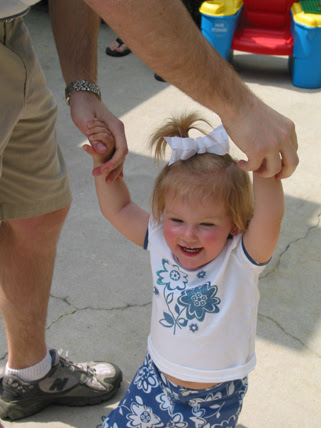 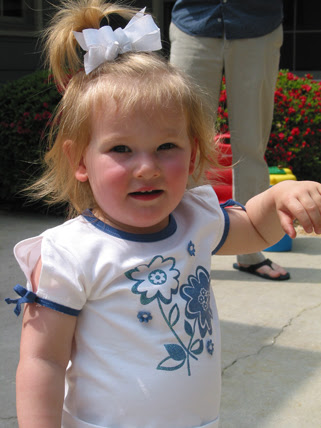 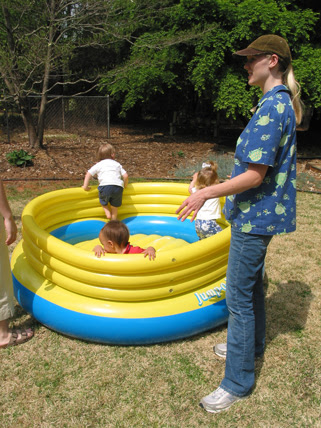 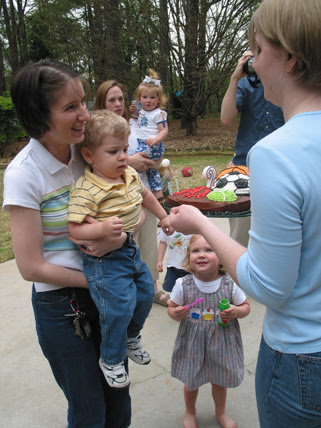 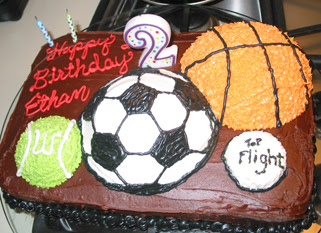 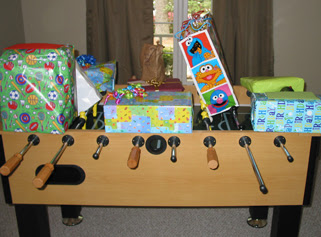 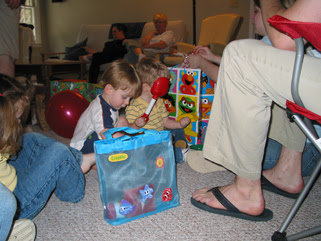 Thursday, April 08, 2004
Family photo, before my sister... There are more family photos on my dad's photo website 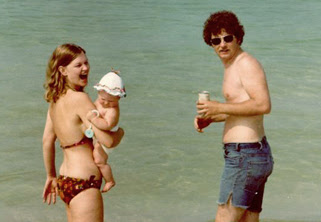 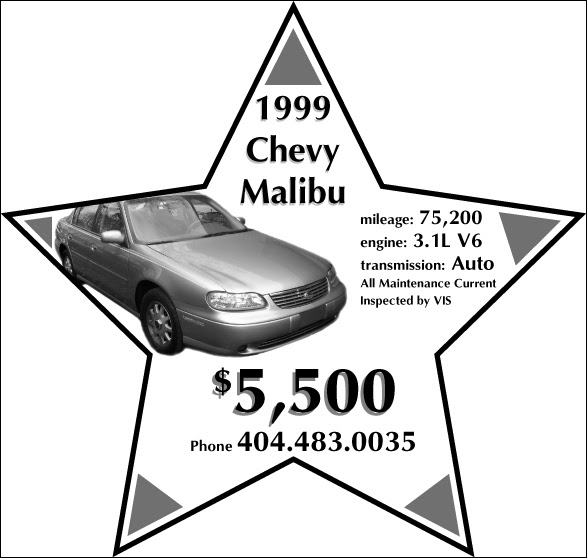 Ashley and Matt's wedding toast I don't know how well the toast I made to Ashley and Matt the night of the rehearsal dinner went over, but this was the full toast as I had written it in advance:

I met Ashley in our first drawing class in Graphic Design at UGA. At first I knew her only as the girl who always fights with the teacher about how to draw her strappy black platform sandals designed by Tori Amos. By the end of the semester that same teacher was completely blown away by her realistic looking coke bottle that she illustrated and colored in PhotoShop.

The first time we talked, we talked about Matt. She said that she and her boyfriend that she had been dating forever just decided to break up, but she didn’t know why. I could tell it was making her miserable. Soon after, fate in the form of a man named Tom Petty stepped in and brought them back together. You could tell that they were just made for each other.

Ashley and I liked the same music, TV shows, movies, artists, food, and the list went on and on. We became inseperable in class and outside of class and eventually decided to move in together to finish out our last year in college.

When I first went over to Ashley’s apartment, I immediately realized that this was not the apartment of any typical college student. Michael Graves’ designs filled the kitchen along with little touches from Pottery Barn. I sat there on her blue futon and pointed out everything that belonged to her roomate because their tastes were so obviously different.

I moved in and down went her old roomate’s posters of animals and cute little girls and up went Picasso and Escher with the Van Gogh prints Ashley had all over the apartment.

We had so much fun living together. It was even fun doing schoolwork together. I don’t know how many hours we spent drawing and doing calligraphy on that glass coffee table in our living room.

Ashley is one of the most creative people I know. Every time I hit any kind of bump or obsticle in my design work, Ashley always had a great idea to help me. It is always better to have someone to work with on art projects, rather than trying to figure it out all by yourself. And I always knew that Ashley would be honest and tell me what she really thought about whatever I was working on.

Some of my favorite memories of Ashley include playing Simpsons Trivia at Barbaritos, drawing caricatures of our classmates on the dry erase board and then denying it was us, playing Pictionary and Hangman in class, going to Taco Stand and drinking margaritas before our field trip to the newspaper, and eating sausages from a street vendor in downtown Athens.

Ashley was there to see my relationship with my now, husband blossom from friendship into romance and eventually she and Matt were in our wedding to see us get married. And now, I am so incredibly honored that she asked me to be her Matron of honor. Austin and I just adore Ashley and Matt and we know how happy they will be together.

Despite the hard times Ashley has been through in her life, she has become such an incredible, beautiful, artistic, wonderful person. And I know that a major part of that is because of Matt. They are best friends and they will soon be husband and wife. To the bride and groom. May you have a lifetime of happiness together.

Saturday, April 03, 2004
Memory Lane It is funny how photos and songs and even tastes and smells remind you of good times. My sister and I spent most of the evening looking through pictures taken when we were in college (well, she was still in high school in a few of them). Anyway, it just reminded me about some of the best and strangest times of my life and really made me happy. And I thought I was fat back then, but I wish I looked like that now! Anyway, on my way home I was listening to 99x which has now been playing mostly (or maybe all) 90s music on the weekends. On the way home I heard Pearl Jam and U2 and the Beastie Boys and Filter and they all just made me feel so happy. So here are some songs and/or musical artists that are grouped by the time in my life they remind me of (and yes, some of these I'm embarrassed to admit that I liked them):

Early high school, learning to drive (and crash) cars - Smashing Pumpkins, Tom Petty - Last Dance with Mary Jane, The Beatles, The Cranberries, The Offspring, Belly, Talking Heads (I remember a friend of mine playing Psycho Killer for one of our teachers at French Immersion Camp to try to convince her that we were listening to French music), Counting Crows...

Senior year in high school, working at Target, the last summer before college started - 311, No Doubt, Cake, Tuesday's Gone - Lynrd Skynrd (I actually remembered listening to this song on repeat at a camp out for about 3 hours straight), Black - Pearl Jam (this one I remember singing as loud as I could with a bunch of people sitting on a friend's living room floor), Tori Amos, Dave Matthews...

Freshman and Sophomore years in college - Radiohead - OK Computer (the whole album), Crosby, Stills, Nash and Young, Pat Benetar, Marvin Gaye - Sexual Healing (Just because I remember my friend Laura descending steps faster than anyone I've ever seen before to hear and sing this song as loud as she could), Clarence Carter - Strokin', Soft Cell - Tainted Love, Outkast...

Summer 1999, Peylota tournaments and friends with our neighbors in the Player's Club apartments, this was a summer when there were a lot of bubbles in the hot tub - Lots of Beastie Boys - mainly Check Your Head and Ill Communication, Tricky, DJ Shadow, Kool and the Gang, Genesis - It's Just a Shame, That's all, Lionel Richie - Easy Like Sunday Morning...

And then there is music that reminds me of my husband - Jimi Hendrix - May This Be Love, Nirvana - Where Did you Sleep Last Night, Marvin Gaye - Let's Get it on, Erasure - A Little Respect, anything by Johnny Cash...