Sunday, October 31, 2004
Halloween 2004 Well, we made it through another Halloween in our neighborhood. It actually seemed a little calmer than last year. Ethan was Captain Hook. He didn't really like trick or treating too much. He was a little shy and a little scared. Of course I took a lot of Ethan pictures. I'm not so great at night photograpy, but I tried my best to get pictures of the "scary yellow house" as Ethan called it. I have never seen Halloween decorations like this (except for maybe their decorations from last year). Oh, and be sure to notice the picture of Austin's dad with his really funny wig. He looked hilarious!

It's great to be... a Gator Hater! FINALLY, Georgia beats Florida! It is the first time we've won since 1997. And it is the first time Florida, Miami, and Florida State have all lost in one weekend since 1978. This all makes me very happy.

Friday, October 29, 2004
Gummy Dog This was my new song I came up with when Holly kept biting my hand when I tried to play fetch with her. I told her we would take out all her teeth and call her Gummy Dog. I'm glad dogs can't understand what you say to them!

Are you guys happy now? I'm sorry it took me so long to post. But here are two posts (well, three including this one) with lots of pictures to look at. I'm sure I'll have more pictures to post from this weekend too. So keep reading, please... And don't stage a revolt!

Total Eclipse of the Moon I apologize for that title. How corny is that? Anyway, my dad took these awesome pictures of the lunar eclipse the night before last (October 27th). It happened on my parent's 31st anniversary. I absolutely love this picture of my mom. She looks like a little kid waiting for Santa or something. And it just makes me feel like you can tell how much my dad loves her.

Autumn in Loganville While we were waiting for Austin's parents Sunday night at their house, Austin and I took some pictures around their house and yard. When the sun sets in the fall, it creates the prettiest light. And it always looks so gorgeous on the leaves that have changed color. 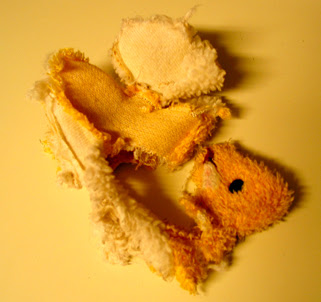 If you might remember, the giraffe looked like this when Holly first started pulling its stuffing out (around the beginning of October). Poor, giraffe. It has no stuffing at all anymore. 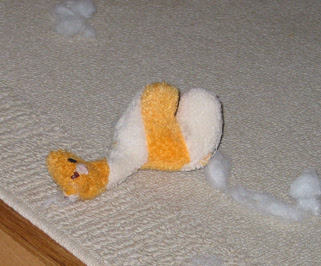 Getting flowers for no reason at all is the best reason to get flowers. Thank you Austin! 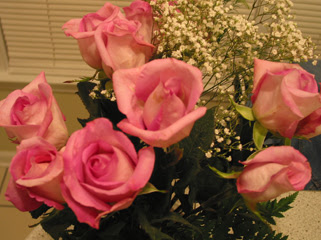 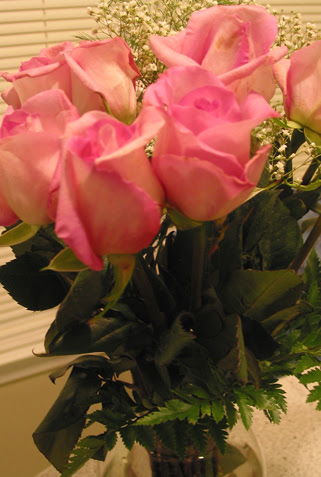 Tuesday, October 19, 2004
Ooooooh scary!!! Here are some pictures of my fall/halloween decorations. But first, a picture of Holly. Holly has an irrational and inexplicable fear of our vacuum cleaner. The first time we had to vacuum anything with her around she went crazy barking and then she pooped on the floor. The second time, the same thing happened. We don't even have to turn the vacuum on to scare her though. I was just rolling it out of the closet last night and she starting barking and jumping backwards. So, of course, as the horrible doggie parents we are, we had to exploit the fear by chasing her around with the vacuum cleaner. Well, I didn't, but Austin did. I just took pictures. This picture shows her after she jumped on the couch to get away from the vacuum cleaner. Last night she wouldn't even walk by it. She walked all the way around the loveseat to go outside rather than walk by it. This morning she was a little braver. She walked up to the vacuum cleaner tentatively and sniffed it. While she was sniffing it, I locked the door. The click of the door lock made her jump way back. What a wimp!